Maybe you saw people playing the game at your local shop, maybe you need a break from Magic: The Gathering, maybe you just love cyberpunk. Whatever the reason, welcome to Android: Netrunner!

The goal of this guide is to provide a concise introduction to Android: Netrunner. This guide won’t cover how to actually play the game (though there are links to documents and videos that will), but is instead intended to answer some of the initial questions that you might have when you are considering playing for the first time. If you spot something that is incorrect or if you have a question that I didn’t answer, leave a comment below and I’ll do my best to address it.

What is Android: Netrunner? 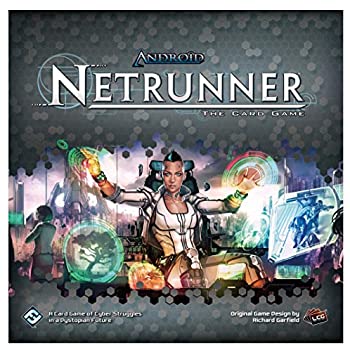 Android: Netrunner (referred to as Netrunner from here on out) is an asymmetric card game in which one player plays as a Corporation trying to advance its secret agendas to the detriment of everyone else while their opponent plays as a hacker (a Runner) who is trying to expose those secret agendas to the world. The game is set in a cyberpunk future (think Blade Runner), complete with a moon colony, space elevator, and all sorts of augmented humans.

Players usually bring at least one Corporation deck and one Runner deck so that they can switch off after a game. Once you learn the rules and get comfortable with the basic concepts, a single game of Netrunner usually lasts about 30 minutes.

Although you can keep playing the same cards forever, if you are playing in a public group or at a competitive level, you should know that Netrunner is a Living Card Game (LCG), which means that new cards are periodically released (releases are generally referred to as sets or cycles) and old cards get rotated out. This ensures that the game continues to grow and change over time, without becoming stale. How this differs from a traditional Collectible/Trading Card Game such as Magic, is that Netrunner cards are not sold as randomized boosters, but rather as expansion packs that contain all of the cards in the expansion.

That sounds cool, how do I get started with Netrunner?

Hands down, the best way to get started with the game is to find a local group. They can teach you how to play and will have decks that you can play with as you get started. If there isn’t a group already meeting at your Local Game Shop (LGS), check online:

Is there anything I should do to prepare for my first game?

Although groups will be happy to teach you how to play, you can speed things up by familiarizing yourself with the rules ahead of time.

You don’t need to bring anything your first time playing, just be open-minded and upfront and you will have a great time. As I mentioned earlier, the people I have met playing the game have been incredibly welcoming.

What if there isn’t a group near me or I just want to play with my friends?

No problem! You only need two people to play. You will need to put more work into learning the rules, but the game is well-designed and once you pick up the basics you can start playing. However, it is still a good idea to know where to go for help:

I did some searching on the internet, and it looks like Netrunner is dead. Is this true?

No, Netrunner is not dead. FFG, the company who was publishing the game, is no longer publishing or developing it. Not to worry, the community has stepped up and has taken over this role. This has primarily taken the form of NISEI (Nextrunner International Support & Expansion Initiative), which has published one cycle (Downfall), is set to publish another next month (Uprising), and has announced a cycle aimed at new players for 2020 (System Gateway).

So how do I get cards?

The cycles that NISEI is putting out are available Print On Demand, but the old sets are getting increasingly expensive. Fortunately, since no one is making a profit off the game any more, there is no incentive to force players to buy cards, and proxies are legal (meaning you can print the cards at home, put them in card sleeves with a backer card, and play with them) at every level of play.

As NISEI continues to produce new cards and include reprints in their cycles, it is conceivable that at some point the entire cardpool may be available through Print on Demand.

You can print proxies from http://proxynexus.net which will let you print card by card, entire cycles (sets), or decklists from https://netrunnerdb.com If you do not have a printer, you might want to check at your local library, which might let you print for free or inexpensively.

And what cards should I get?

In a few months here, the answer to that will likely be NISEI’s System Gateway, which will include two preconstructed decks aimed specifically at introducing new players to the game. For now, you have a few options:

With proxies being legal, there is very little cost to play the game and you don’t have to worry about buying into an expensive deck then realizing you don’t like it.

Do I need anything else to play?

Once you have some cards and someone to play with, you will need some way of tracking money and other information in the game. Many players use a combination of dice and poker chips, but there are many options. A playmat can help to keep your card sleeves clean (so that they shuffle easily) but isn’t necessary.

Is there online play?

You can play online at https://www.jinteki.net which is a fan-run site. I have only played a couple of games on it so far, and while the experience isn’t as polished as you would see with Magic: Arena or Hearthstone, it is surprisingly smooth given its lack of corporate backing. Erik Twice has written a handy guide on how to get started with Jinteki that you might want to check out before you get started.

For a new player, while it could be your first introduction to the game, it doesn’t do much hand-holding and there are some bugs. It does have the advantage of not requiring you to print anything or find nearby players however. If you are playing your first games on Jinteki rather than in person, tag them with “help me learn” and a veteran player will teach you the game.

I’m not sure (since I’m not a lawyer or part of NISEI), but I’m guessing that it has something to do with there being multiple rights-holders and with NISEI being careful to be respectful of Intellectual Property (the new cards subtly different iconography from the originals, and reprints have new art).

For me, this question arose because I didn’t want to get involved with a game that might be removed soon (and because I find stuff like this interesting), but at this point I am not concerned. If there were a huge issue, FFG probably would have done something when Downfall came out, and even if they did at this point, it appears that the fan community could handle it (by making enough changes to the game to make it legally distinct and continuing from there).

What are NISEI’s long-term goals?

When I asked someone in my group who is involved with NISEI, they said that their mission is to keep Netrunner alive and thriving without corporate support. I was told that they are a non-profit, and all money is reinvested in the game (mostly to pay artists). Also, they have no non-Netrunner plans (world domination apparently isn’t on the docket, sorry folks).

Anything else I should know?

There are plenty of resources available that you might want to take a look at, here are a couple:

Who the heck are you and why did you write this?

I’m just a new player who was unable to find the information he needed to start all in one place so decided to do it myself. I am not affiliated with NISEI, FFG, or Wizards of the Coast. As I mentioned at the beginning, if you see something that is wrong or missing, let me know and I will do my best to update it.