Bloc by Bloc and some heuristics for crowdfunding

FOMO (Fear Of Missing Out) is a big thing in board games. Because they are a niche hobby, they have small print runs, and the lack of standardization (every title has different cards, boards, pieces, etc.) makes it difficult to do reprints unless there is massive demand. As a result, if you see a game for sale that you want (that isn’t a mainstream title like Ticket to Ride), you may not have another chance to buy it new. Crowdfunding (Kickstarter et al.) has only exacerbated this issue.

That being said, FOMO on its own is not a good reason to buy (or back) a game. If you miss a game, you can probably trade for it or buy it used, or it will be reimplemented (Glory to Rome is hard to come by but I own both Mottainai and Import/Export–I don’t feel like I’m missing out). Over the years, I’ve backed my share of games that I could have happily skipped, but there’s only one game that I wish I had backed: Bloc by Bloc. 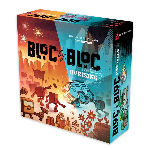 Well, Bloc by Bloc is currently funding for its third (and final, the creators say) version. It’s a game about urban uprising, with revisions heavily inspired by the events of 2020. It’s playable as co-op or semi-co-op, and although I’ve heard nothing but good things about the second edition, this one looks just amazing. I’m not going to spend a ton of time describing the game, but you can find more information on their campaign page (Space-Biff also has a good write-up).

This is an independent game put out by a small company (their only other games are the previous two versions of this one), so it is uncertain if it will get another print run. The campaign only has about a week left, so the time is now if you’re interested.

Related, here are my criteria for whether I back a crowdfunding game. Generally, I will only back something if at least one of the following is true:

This means that I usually pass on games from big publishers or which massively exceed their funding goal, and honestly that has worked out just fine for me.